Jon and I decided to go out to dinner this past Friday night. After much debate of “Where do you wanna go?” and “I don’t care”. I remembered hearing about the Point Lookout Alehouse in Point Lookout, NY. As I always do, I stalked the menu online before going and saw two of the greatest words that could have ever been put together there on a page. Words that when paired evoke my saliva glands (are those a thing?) and sheer, unadulterated happiness. Are you ready? Are you sure?? Here goes: Lobster Guacamole. Succulent, juicy chunks of lobster, dispersed in a sea of creamy green avocado goodness. I mean, who wouldn’t want that?? So I threw on my favorite (and only) Lilly for Target dress that I scored on Ebay (apparently it helps to fit into a child’s XL because it’s much cheaper than the women’s size) and got myself dolled up for a date night.

Point Lookout should be a 10 minute (if that) drive from our home. So why were we in the car for about 40 minutes. No, this is not a riddle. It is because Point Lookout has ZERO parking for non residents. Jon was dangerously close to turning the car around and ordering takeout and making it a Netflix night. Seriously, we almost got into a fight with a not so nice 80 year old woman. It was that bad, you guys.

We finally found parking (SUCCESS!) and got to the Ale House. The manager was a lovely gentleman wearing madras pants who complimented my ever so summery dress (points for you sir!) who told us our table would be ready shortly. The restaurant is quaint on the outside, with big doors that open up onto the sidewalk with Adirondack chairs for patrons to sit in and have a few cocktails prior to dinner. The interior is an inviting pub with a large mahogany bar that was jam packed when we arrived. The waitstaff is outfitted in black tank tops that say “The Point” in front, and 15 MPH on the back, a nod to PLO’s speed limit. We ordered beer (a Montauk Session for me-YUM-and a Bud Light for my driver…I mean husband). After about 6 minutes, we were escorted to our high top right next to the doors where we could have the best of both worlds. Sitting halfway outside on a beautiful balmy summer night and watching the Yankee game (not really my idea of a good time, but compromise is key right?). We were given our menus (like I even needed a menu! 2 words: Lobster Guac. Or one word: LobGuac. Give it to me. Give it to me now!!!!).

I scanned the menu. It wasn’t there. No. NO. This could not be! I read it back and front 3 times. It. Wasn’t. There. Maybe there was a mistake. Maybe it was a special. I asked our server who delivered the news to me the way she had delivered it to hundreds (ok probably not) of patrons who had the same hopes and dreams of LobGuac as I did. The menu online isn’t updated and there was no Lobster Guac anymore. Horror. Devastation. Grief. Sadness.

After my initial depression, I picked up the pieces of my dignity and we ordered baked clams as an app and I ordered a full broiled lobster for my meal (when I am sad I eat. DON’T JUDGE ME). Jon ordered the NY Strip Steak because apparently we are ballers and order surf and turf on what was supposed to be a not super expensive night out. Oops.

The clams were delicious and super filling to the point where I only finished one side of my lobster (hooray leftovers!). The steak was yummy as well and the mashed potatoes were to die for. The staff was very attentive and very welcoming, food was fab and the beer selection on tap is nothing to sniff at. Overall, we had a great experience and had a great little date night but I am still dreaming of Lobster Guacamole. LobGuac, you are my white whale and one day you will be mine!!!!! 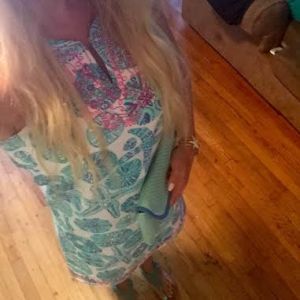 My Lilly for Target date night look. No I did not wait on that insane line. It was an Ebay steal! It’s a girl’s XL and was going for about $50 less than the women’s shift dress and fits like a 4-6.

about the breezy blonde

Hi there! Welcome to The Breezy Blonde. I'm Jen and I'm the voice behind The Breezy Blonde. I live with my husband in a sweet little beachside bungalow and I love all things beachy, whimsical & bright. I believe in living life creatively & am always looking for my next adventure. Feel free to drop me a line at thebreezyblonde@gmail.com. Thanks for stopping by!